The cost for companies to provide medical care to staff continues to vastly outpace inflation in most major economies, according to new research by Mercer Marsh Benefits, a partnership between global professional services firms, Mercer and Marsh. In Asia, medical costs are anticipated to increase by 11.5% against an inflation rate of 2.1%. The research into company-provided employee healthcare plans also found that the costs were largely driven by claims related to employee lifestyle choices, such as smoking, a lack of exercise and a poor diet.

The research Medical Trends Around the World, is based on a survey of 171 insurers across 49 countries (outside of the United States) and shows that, across 40 countries, the average per person increase in healthcare costs (Table 1) is, globally, almost triple the rate of inflation. Globally, 2015 saw an average 9.9% increase in medical costs, with 2016 forecast at 9.8%. Cost increases are being driven by non-communicable diseases; those that cannot be caught from other people but are frequently caused by the lifestyle choices of individuals. Average overall price inflation reduced from 3.9% to 3.5% over the same period.

For Jacques Goulet, Mercer’s President of Retirement, Health and Benefits, the results yielded by this year’s survey underscore the importance of the role employers can play globally in controlling healthcare costs. “Stakeholders need to embrace disruption in health care. The window of opportunity is now for employer-led healthcare transformation – in the United States but also in other geographies where employers have not played a direct traditional role but where having a cost effective and high quality health care system is an enabler for business success.”

According to Graham Pearce, Partner at Mercer, “We believe that, quite frankly, a medical cost inflation rate close to three times that of overall inflation is just not sustainable. It is therefore of the utmost importance that employers become much more serious about ‘bending the trend’ with a long-term healthcare strategy. This approach, however, will require some initial investment, strong executive support and rigorous analysis of what is, and is not, working for specific workforce populations.”

The report asked insurers for information on the rising cost of medical care compared to inflation in each market as well as the types, costs and frequency of medical conditions that were claimed for by company employees in 2015.

Rose Kwan of Mercer Marsh Benefits in Singapore explained that, “In Asia, the role of governments in specific markets has greatly impacted how consumers are experiencing healthcare. For example, as our report indicates, with recent legislation coming to Vietnam from the Ministry of Health, the country is bracing for an anticipated 30% increase in costs for some public hospital services and products. One core and fundamental strategy available to employers is to help employees live a healthier life, improve their productivity, reduce absences and increase engagement. Wellness programs, education of the impact of lifestyle choices and the redesign of medical insurance plans have all had an important role to play in better controlling long-term medical plan cost trends.”

Europe
Europe was the region with the lowest levels of forecast medical inflation running at 7.8% in 2016 against a regional average rate of inflation of 2.5%. Russia, Lithuania and Ukraine are forecasting the highest expected increases in medical costs of 17.8%, 17.3% and 15% respectively. Lowest levels of forecast medical inflation are France (1.8%), Netherlands (2.5%) and Italy (2.9%). The UK is forecasting cost increases of 6.4%. In Europe, the top claims (based on total cost) in 2015 (Table 1) were cancer (53%), osteomuscular diseases (43%), and diseases of the circulatory system (41%). In addition to these claims, gastro-intestinal diseases were among some of the most frequent claims reported, and the report shows that stress-related health concerns are also growing in Europe.

The Americas (excl USA1)
Costs in Canada are expected to increase by 6% in 2016 against a background inflation rate of 1.3%. Across Latin America, medical inflation averages 12.8% compared to an average inflation rate of 8%. Cost increases are expected to be highest in Argentina (33.3%), followed by Brazil (18.6%) and Mexico (11%). As with Europe, cancer was the most common cause of claims cost (82%) followed by diseases of the circulatory system (68%) and respiratory conditions (27%) and obstetrics and pregnancy (27%). In Latin America, employers and insurers are seeking to address health risk issues and changes in demographics that are impacted by continued general inflation and more recently by large exchange rate fluctuations.

Insurers were also asked what greatest risks facing medical costs in the future. Globally insurers said that the two greatest risks were metabolic factors (high blood pressure, cholesterol) and dietary risk (obesity, physical inactivity). The third most cited risk varied by region. In Asia, environmental risk was a factor while smoking was most prevalent in Latin America and the Middle East and Africa. In Europe, emotional and mental health issues as cited as the third most serious risk facing medical plans.

Notes to Editors
Data was collected from 180 insurers across 49 countries from February to May 2016. 171 insurers completed the full survey while 9 additional insurers provided medical trend data. The total number of countries that participated in the survey overall is 49 but only 40 had enough data to publish medical trend rates.

Please contact the Press Officer for full graph data.  1US data can be found in the Mercer National Survey of Employer-Sponsored Medical Plans. As the research parameters for the two reports are different, US data has been excluded from this release; however according to the 2015 Mercer National Survey of Employer-Sponsored Health Plans, US employers experienced 3.8% increase in the cost of running company healthcare plans.  Forecasts and projections for 2016 are estimates only and actual rates may differ materially from these figures.

About Mercer Marsh Benefits
Mercer Marsh Benefits provides clients with a single source for managing the costs, people risks, and complexities of employee benefits. The network is a combination of Mercer and Marsh local offices around the world, plus country correspondents who have been selected based on specific criteria. Our benefits professionals located in 135 countries and servicing clients in more than 150 countries, are deeply knowledgeable about their local markets. Through our locally established businesses, we have a unique common platform which allows us to serve clients with global consistency and locally unique solutions. Mercer and Marsh are two of the Marsh & McLennan Companies, together with Guy Carpenter and Oliver Wyman.

Insurers were asked “Based on (dollar) amount claimed, what the top 3 causes were of claims cost in 2015 based on your book of group or overall business?” 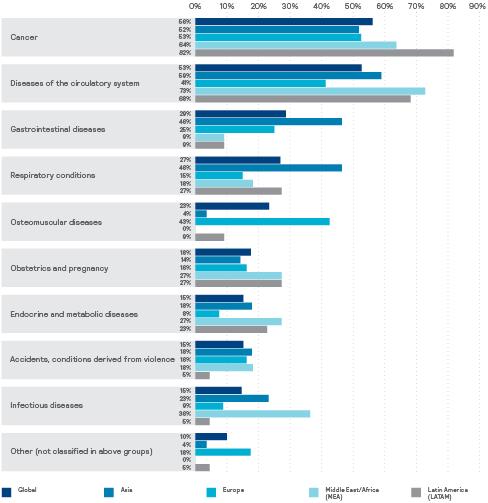 Table 2: Rates of Medical Inflation around the World 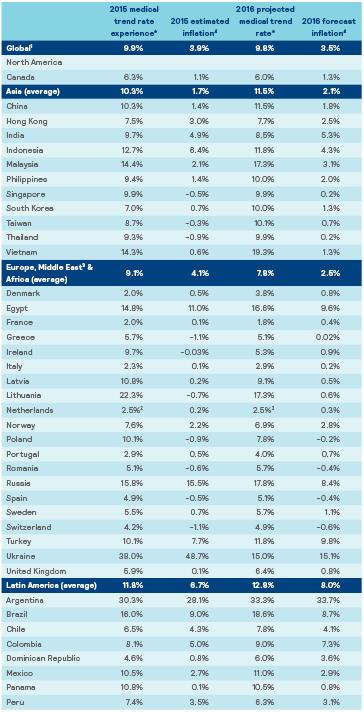 *The above medical trend rates reflect insurer survey results and may not be MMB’s view.
1 average of 40 participating countries with an acceptable number of responses
2 stated values due mainly by increase of deductible
3 Although we received insufficient responses for Middle East, in general, medical inflation there remains high and consistent with previous two years. Utilization trends show bias toward secondary health care facilities, which is often further compounded by overutilization and overprescribing, so this trend is set to continue. As a result, within medical insurance market we are seeing increased emphasis on risk control, either through proactive health management (wellness initiatives) or managed care approaches. The market, however, is not advanced in these approaches and, as such, we do not foresee this having significant impact on cost in short term.
4 Sources for inflation rates include:
·          International Monetary Fund, World Economic Outlook Database, April 2016.
·          LA Economic Trends, April 2016 update.
·          International Labour Organization, World Employment and Social Outlook, 2016
·          European Commission, February 2016